One big thing that we all enjoyed was a parade that was part of a War Bond Rally and featured General George Patton and General Jimmy Doolittle. I believe the parade was on Wilshire Boulevard. I remember that Grandpa drove us over there and we sat on the curb and waited to see the war heroes. There were several cars in the parade and the two Generals were riding in the back seat of a convertible.

Grandpa had been telling us about Walter Knott and his berry farm and the delicious boysenberries he grew there. We went there one day and I remember it as being out in the middle of a large grove. We drove down a lane, through the trees until we got to a clearing where there were a few old buildings.

We got out of the car and walked over to a building that looked like a jail. Inside, there was a dummy that looked like a real bad guy. It scared the devil out of us when he started talking! We talked to him for a while about his plight and his sorry history and then were completely amazed when he started talking about our trip and other personal things that we hadn’t mentioned. We kept up a conversation but kept wondering how this dummy knew so much about us. We soon heard Grandpa yelling for us from around the corner of the next building. We hadn’t noticed that he wasn’t still with us. We went around the corner of the building and found Grandpa and Walter Knott laughing like crazy. Mr. Knott held up a microphone and told how he and Grandpa had conspired and tricked us. We continued to have a great time and bought several jars of boysenberry jam before we left. Even today, we’ll be in a grocery store and I’ll see jars of jam with the distinctive Knott’s Berry Farm script and I’ll flash back on some of these memories. 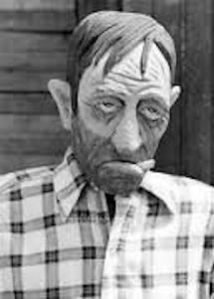 It’s been 70 years but I still recognize this guy that talked to us from the jail.

I didn’t know where we were but one day we drove past an aircraft factory. I would guess now, that we must have been in the Santa Monica area. There were planes parked everywhere and the whole area was covered with camouflage netting. The top of the netting looked like grass, vegetation, and homes. Remember, at this time of the war, we didn’t know but what the Japanese would be attacking the west coast at any time. The way the netting covered the whole area, it made it look like homes and farms. I don’t remember now what types of planes we saw, but I recognized them at the time. Like most American kids, I had studied my “spotter” cards and recognized almost every plane I saw. For you young people who haven’t seen them, the “spotter” cards came in a deck and were the same size as regular playing cards. Each card was devoted to a different airplane and told what it was and what its identifying features were. Also, there were 3 or 4 different views of each plane so you could identify it when seen from any angle. Anyhow, the sight of all those planes and that camouflage brought the war a little closer to home.

Mom and Dad wanted to visit Ruby Mae in San Diego. She actually lived in El Cajon, just east of San Diego. Grandpa loaned us his car and we headed south on Highway 101. Dad had promised that we could go swimming in the ocean and as soon as we began seeing it, we began begging to swim. We finally got to La Jolla and Dad stopped in a good area of the beach and we all put on our swim suits. It was a gloomy, overcast morning, and pretty cool. This was what we now know as “June Gloom” and we were miserable. My sister and I had run down to the surf and waded in but turned right around and got out. That water was freezing cold and we weren’t about to go in again. Dad said that we had been whining for 100 miles and we had better get in the water and enjoy it. He finally gave up on us and dived into the surf and pretended that he was having the time of his life. Mom had already changed back into her dress as she wasn’t getting into that water either. We got through that experience and made it to Ruby’s place in El Cajon.

Ruby lived in the first or second block of west El Cajon Boulevard, just as you come in to town. She owned or managed a pottery shop there. Her house or building where she lived was set back from the street and the whole front yard was full of pottery. I remember the impression of an organized place of business and I imagine that it was because Ruby Mae was a high energy type of person.

Ruby took us to Tijuana and I remember it as being very colorful. My sister and I had our pictures taken while seated on those donkeys that have the “zebra” stripes painted on them.

Mom and Dad were surprised to receive unusual gifts from Ruby. They were a pair of flesh-colored highball glasses shaped like women’s torsos. She said the originals were made for ventriloquist Edgar Bergen by the pottery factory that supplied her with product.

The biggest thrill for me came when we attended the Roy Rogers Rodeo at the Los Angeles Memorial Coliseum. For quite some time I had been going to the cowboy movies on Saturday afternoons and to get to see Roy Rogers and Trigger in person was a fantastic experience. 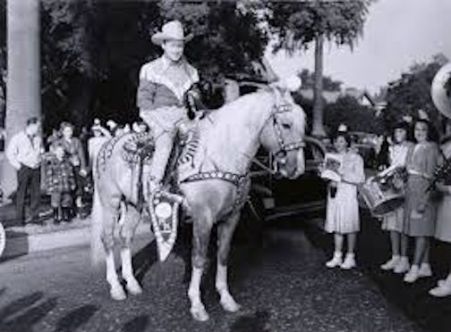