Russ has been working on a big housing development this past year. The job is only 15 or 20 minutes drive from where he lives and is the closest to home he has ever worked. Ventura County has a lot of big, rocky hills so Russ has had an interesting time of it. They are chopping the tops off the hills and have a blasting crew working every day. Russ has been driving a D-11 Cat and doing the ripping after each blast.

Russ told me a good story and I’ll try to repeat it for you. If I mess it up, he can straighten me out later. Here it is:

When the job first started, Russ was one of the first guys brought in. He was setting grade stakes and climbed the biggest hill on the place to check out the lay of the land. It was too steep to drive so he had to hike up and grabbed onto bushes to get to the top. When he got there he was looking around and ran across some of the biggest paw prints he had ever seen. He figured it was a mighty big mountain lion and he was uneasy about being afoot and got the heck out of there. He told the other guys about it and they thought he was nuts. Over the next few days two of the crew had to go up there and they saw the tracks and backed Russ up on his story. Of course, the rest of the men continued to tease him about his phantom mountain lion. This happened several months ago and no one has reported anything since. However, I was talking with Russ on the phone and he told me some interesting stuff. He says there is another big housing development (Porter Ranch) being built near the one he is working. Last week, the water truck driver spotted a big mountain lion and was able to get a picture of it. Russ said he was sure glad because some of his crew were still laughing at him about it and he feels that now he will finally have some credibility. Russ shared the picture with us. 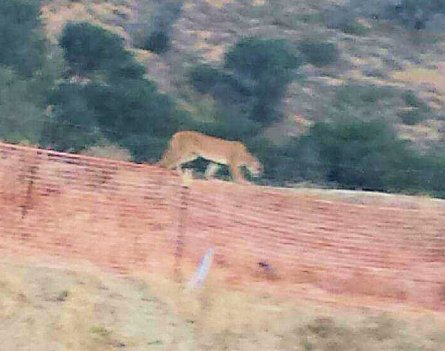 Pat reminded me of this one. The boys, Russ and Doug, must have been 10 or 11 and that would make Terri about 8 or 9. After supper we had gone to visit our friends, Roy and Lois and their kids. Roy’s horse was sick and a Veterinarian was there tending to her. When we got there, the vet had a big plastic syringe in his hand. It didn’t have a needle on the end of it so he must have used it to squirt some anti-biotics down her throat. Russ asked if he could have the syringe to use as a squirt gun. The vet was a good guy and let him have it and the kids ran off to play. We visited for a short time and then went home. It was getting close to dusk and the kids were playing in the front yard. They were squirting each other with the syringe and taking turns climbing the olive tree and were just doing what kids do. Pat was working in the kitchen and could glance out the window from time to time and see that the kids were okay.

A couple of the neighbor girls from down the block were riding their bicycles up and down the sidewalk. One girl was making snide remarks to Russ as she went past. We suspect that she might have had a crush on him but didn’t know how to deal with it. They kept riding back and forth and the one girl added name calling to her insults. Pat had the kitchen window open so she overheard some of the remarks. The girls quit coming by so Pat figured they had gotten tired of their game and went home. What she didn’t know was that Russ was sick of the girl and her comments and told her that if she called him one more name he was going to pee on her. Well, she pushed her luck and when she came by again, Russ squirted her. She screamed and rode off and didn’t come back.

A little later, an El Cajon police car pulls up to the curb and an officer gets out. He heads for the front door, and the kids, being curious, fell in behind him. Pat had seen the car pull up and she headed for the front door and yelled at me. “Good evening, Ma’am”, says the cop. “Are you Mrs. Thomas?” “Yes”, says Pat, “What can I do for you?” He says “I need to talk to your son Russell”. “What’s it about” asks Pat.” “The little neighbor girl says he urinated on her”, said the cop. “My son would never do that” exclaims Pat. Just then, I’m joining them at the door and heard Russ say “Í didn’t do that”! “I saw the water stains on her clothing” the cop says. ”Well, I just squirted her” says Russ. “Why don’t you show me what you did” says the cop. “Okay”, says Russ, “I put the thing in the garage.”

Russ headed for the garage with Pat and I, the cop, and the rest of the kids falling in behind him. The big overhead door was open and Russ got the syringe from where he had put it and took it over to the deep sink where he filled it with water. He then demonstrated how he held it down at his side, out of sight, and then squirted the girl as she rode past and called him a name. His story was quite convincing and the cop turned to Pat and I and grinned. Then he put on his “stern” face and turned back around to Russ and told him that he was keeping the syringe to show to the father of the neighbor girl and after this, if anyone bothered him, he should just go in the house and forget it.

Last season NBC started airing a new show called “Who Do You Think You Are?” It’s sponsored by the genealogy-based website, Ancestry.com, and they take a celebrity and trace that person’s ancestors back as far as they can. They visit locations in the U.S. and even go back to Europe or Africa or wherever the quest takes them.

Pat and I were watching an episode last night featuring country singer, Tim McGraw. The story told how Tim thought his last name was “Smith” until he was 11 years old and found his birth certificate and learned that his name was really “McGraw” and that led him to the fact that he was the son of Tug McGraw the baseball player.

As they dug into his story, Tim learned that he was part of a pioneer family in Missouri named Chrisman. The Chrismans were tracked back to the Shenandoah Valley of Virginia during the 1700’s. The story told how the Palatines fled religious persecution in Germany and traveled to England and then were recruited to travel to America. Upon arrival in America the people became indentured servants as the British forced them to work off the cost of their passage. The next revelation was that an earlier ancestor was named “Yost Heyd”. Yost Heyd was apparently an enterprising man and went from being an indentured servant in 1710 to being the largest private land owner in Virginia and was known as “The Baron of Shenandoah”. A young surveyor who was surveying the state recorded Yost Heyd’s name in his journal and probably knew him well. That young surveyor was George Washington.

While Pat and I watched the program, I began to perk up as I heard words like Palatine, Shenandoah, and then “Yost Heyd”. I remembered those names from several years ago when I was posting information and names to my Family Tree Maker database. After watching the program, I went to the computer, opened Family Tree Maker, and did a search on “Yost Heyd”. Sure enough, he popped up and the program said he is my 7th great grandfather! So, Guys…Tim McGraw is your cousin! I know that all of you guys would like to say hello to Tim and would certainly enjoy meeting up with his wife, Faith Hill.