We had never traveled with a cat. When we went off on vacation the cats and dogs stayed home. This trip was to be different, though. After retiring from work, Pat and I decided we needed something different. After living in California for forty years we wanted to get in a more central area and picked Texas as our new home. We made an exploratory trip and decided to buy a home. A cousin of mine owned a van line, an affiliate of United Van Lines, with offices in Wichita, Emporia, and Houston. His people gave us a decent quote and we decided to go with them. Also, I was thinking that if anything went wrong, I could call Cousin Ken and he would fix it.

At this time, the only animal we had left was Baby Cat. She was a mellow old girl, but we had no idea how she would do on the road. We didn’t want the two-day trip to be a traumatic experience for her, so we put some thought into her well-being.

Pat was going to be the driver. Macular degeneration had already messed up my vision. The State of California had already declared that my driver’s license would expire on December 31, 2001. We were leaving for Texas the next day.

To take care of Baby Cat, we placed a bath mat on the floorboard behind the driver’s seat and then placed a litter box on top of the mat. We hoped that would take care of any “accidents”. On the floorboard behind the front passenger seat, we placed a bowl of water, a bowl of dry food, and a small plastic plate for canned food. Under the driver’s seat, and handy to the litter box, we put a box of Zip-Lok plastic bags. The litter was the “clumping” kind so cleaning the litter box was no big deal. We put a roll of paper towels between the front seats and Pat kept her purse there. Those items served as a roadblock and kept the kitty from going between the seats and getting under Pat’s feet or between her and the pedals.

Baby Cat ended up with food and drink, a floor to stroll on, and the two middle seats for napping. 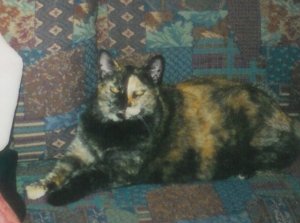 Baby Cat always had an encore, too. Within the first 30 minutes, she would get sick at her stomach and throw up. What was funny, was that she would always run to the litter box and throw up in it. She never once made a mess on the carpet. After she had pooped and thrown up, she was good for the rest of the day. I know she was throwing up due to motion sickness. I remember, as a little kid, my Mom would always tell my sister and I not to look at the telephone poles as they flashed by or we would get sick. I think that’s what was getting Baby Cat. I had stacked that stuff in the one seat, so she would be high enough to see out the window, but she wouldn’t stay there. I even tried holding her, so she could see out and Pat could reach over and pet her, too. However, she would soon start squirming. I would reach back and set her down and she would run to the litter box and barf. This stuff happened on every trip we took with her. We finally realized it was inevitable and quit worrying about it.

Getting back to our move to Texas, we left San Diego early, on the morning of December 31, 2001, heading east on I-8. The weather was perfect for crossing the desert. We stopped for coffee and snacks in Yuma, Gila Bend, and the junction with I-10. By this time, we had developed a routine for caring for Baby Cat. We pulled into McDonald’s and parked where the van could be seen from a booth by a window. The temperature was mild, but we always cracked the windows for the kitty. By the time we got back to the car, Baby Cat would be wide awake, so we would spend a few minutes petting and talking to her., Sometimes, I would hold her for a few miles or until she got bored with it.

We headed south on I-10 with Baby Cat asleep most of the time. We went through Tucson where the walls of the embankment along the freeway are decorated so well. When we got to Willcox, we pulled off the highway at Rex Allen Drive to stop at McDonalds where Pat had a Diet Coke and I had coffee. You young whippersnappers may not know Rex Allen as “The Singing Cowboy” in the movies or as Frontier Doctor on TV. Oh, well.

We got to San Simon where my Grandpa once owned a quarter section of desert land and then crossed the border into New Mexico. We had considered spending the night in Los Cruces, but Pat said she had enough energy to go a little farther. We found a nice motel in one of the towns on the outskirts of El Paso. When we checked in, I told the desk clerk we had a cat with us. At this motel and on subsequent trips to Kansas and back to California the motels didn’t care and didn’t charge extra.

We took Baby Cat to the room first and let her look around. Then, we brought in the suitcases, litter box, food and water. We thought we had taken care of her needs well and we went on to dinner. When we returned to the room, Baby Cat was hiding under the bed. Leaving her alone in a strange place was more traumatic than we thought.

The next morning, wanting to get an early start, we quickly took the luggage, cat paraphernalia, and Baby Cat to the van. Pat and I went back inside and had a quick breakfast. We came out of the restaurant and headed for the van with Pat slightly ahead of me. She got there first and, peering inside, didn’t see Baby Cat. She yelled that the cat had escaped and started unlocking the door. I’m a diabetic and had my glucose meter in my hand. Hearing the urgency in Pat’s voice and worrying about the cat, I did something stupid…I put the glucose meter on the roof of the car. We both had our sliding doors open and were looking like crazy for Baby Cat. Suddenly, Pat yells “Here she is!” Baby Cat came strolling out from the very back of the van. Relieved, we climbed in the car and tried to get back to breathing normally. We would both have gone nuts if the kitty was loose in that parking lot.

We got on the road and headed for El Paso. We hadn’t gone far when I realized that my glucose meter wasn’t in the glove compartment. I told Pat and she pulled over as soon as she could. I jumped out and checked the roof but of course, the meter was long gone. We realized there was nothing to do but find a drug store and buy a replacement. Of course, we also realized that it was just after 7:00 AM on January 1st, a holiday. As we hit

the outskirts of El Paso, we spotted a Wal-Mart and Pat got off at the next exit. We went into the Wal-Mart and found that the pharmacy was closed. We located the manager and asked her if she could get into the pharmacy and sell us a meter. She said she couldn’t do that but if we would be patient she would be right back with some answers for us. A few minutes later she re-appeared and told us that there was a drug store about two miles down the road that was open and could take care of us. She gave us directions and sent us on our way. Sure enough, we found the place, bought a meter and were soon on our way.

Once that crisis was over, the rest of the day went well. In a couple of hours, we switched over to I-20 and went through Midland, Odessa, and Weatherford, and on to Keller. Traveling with Baby Cat went well. If anyone asked me for advice about traveling with a cat, I would first tell them what I’ve told you. Next, I would suggest that they have a microchip implanted in their kitty and that she would wear a harness always, so she’d be easier to catch.