We spent one day at the Santa Anita race track. Not long after we sat down, Betty Grable and her entourage came in and sat down in the row behind us and about 8 or 10 feet to the left. She had her baby with her and a woman who must have been a nanny and a man who was probably the driver. We were all quite excited to see her. Remember, this was the height of WWII and Betty Grable was the most famous pin-up in the world. Even an 8 year old boy knew about her and her legs that had been insured for a million dollars. 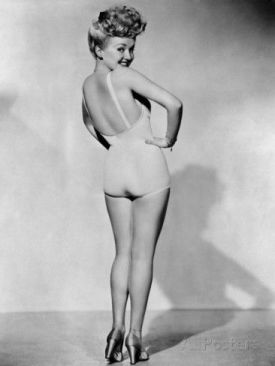 The main thing I remember is that she was nursing her baby and I was told not to watch. We saw some other movie stars but the only one I can remember is Pat O’Brien. Grandpa taught us how to bet on the races and we had a good time betting pennies among ourselves. We used the posted odds and paid off on Win, Place, and Show. The main thing I learned was that having a half hour to wait between races made horse racing a boring proposition and I’ve never wanted to go again.

On one of our excursions we went past the Hollywood Canteen. In War-time 1944 it was at the height of its popularity. The movie stars would show up every day to dance with whatever servicemen were there and did what they could to entertain them. As we drove past, we had high hopes of seeing some movie stars but we had no luck on that.

We went past the Brown Derby Restaurant which was a big part of Hollywood celebrity life. I was amazed to see that it really was shaped like a derby. 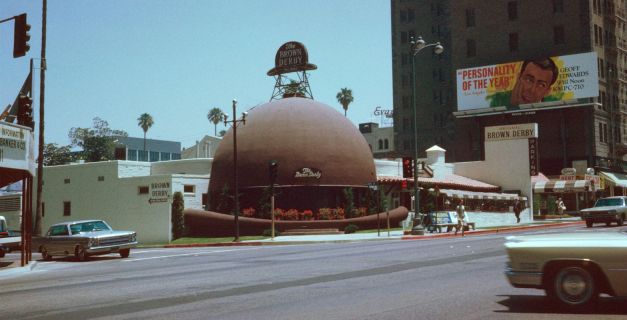 We visited a lot of well known landmarks that were interesting but didn’t leave me with any stories. Among them were the Griffith Park Observatory, the Rose Bowl, the corner of Hollywood and Vine, and Olvera Street.

One day we stopped and walked around in front of Grauman’s Chinese Theater. That was another landmark that even we Kansans knew about.

One morning we had breakfast in Hollywood at the restaurant from which they broadcasted “Don McNeil’s Breakfast Club”. It was a radio show that was heard nationally and was one of the most popular morning shows on the air. We got to watch them do the show and enjoyed it a lot. The building itself was quite interesting. The front was built of rough stone and looked like a grotto. There was a realistic looking waterfall that fell from the roof and was caught behind a façade just above the door. It gave the impression you were entering a cave behind a waterfall.

One day we went to the La Brea Tar Pits. In some areas the tar was still hot and bubbling and in others it had cooled off and solidified. Apparently the animals had come in search of water and had stepped into the tar and become trapped. The workmen at the tar pits were cutting out large blocks of the solidified tar and you could see that there were hundreds of bones in each block. We were told that the blocks of tar would be taken to the coliseum museum where the bones would be removed and assembled in their natural skeleton forms. They would find large animals like dinosaurs and mastodons, wooly mammoths and saber-toothed tigers as well as every other animal that lived in the area. Later we went to the Coliseum Museum that is actually located under the Los Angeles Memorial Coliseum and saw the hundreds of skeletons on display there. I remember the skeleton of a saber-toothed tiger on display near the entrance and a 50 foot long dinosaur hanging from the ceiling.

We went to the Huntington Library and Art Museum. Kids under 12 weren’t allowed inside but Mom convinced the attendant at the door that we should at least be allowed to see the Library’s most famous paintings, “Blue Boy” and “Pinkie”. Mom took us in just long enough to view Blue Boy who was hanging near the entrance and Pinkie who was just down the hall to the right. We felt privileged to get to see them as that was all the grown-ups talked about on the way. Mom bought us some postcards with reproductions of the paintings. Since we weren’t allowed to stay inside, the grownups took turns staying with us in the gardens. I remember the gardens as being beautiful and having a lot of cactus, many of which were in bloom.