It was early 1999 and Pat and I had been living in Avocado Estates for eleven years. Avocado Estates was a gated community of 110 homes in the hills on the south side of El Cajon. The common areas included three avocado groves, a pond, tennis courts, an Olympic-size pool, and a hiking trail. The streets all curved around the hills and gave the development a charming rural look. It was a beautiful place to live and we had thoroughly enjoyed being there. We were getting restless though and were ready to try something different. Pat had taken early retirement and I was just two years away from retiring at 65.

We owned a 3 bedroom condo in University City that we had been renting out for 10 years. We decided that when the current tenant moved out, we would sell our home in Avocado Estates and move into the condo until we decided what we were going to do. By mid year we had received notice from our tenant and we were able to close a deal on the Avocado house. We had the interior of the condo painted, installed new carpet in the bedrooms, replaced the downstairs carpet with wood flooring, and then, Pat remodeled the kitchen. It was a tiny, galley-type kitchen but she designed the cabinets to maximize storage space and bought all new appliances. The kitchen and the rest of the home looked great and you kids were generous with your time in helping us move in. Remember, we had to put a lot of our stuff in storage since we were downsizing considerably.

We enjoyed living in the condo with its proximity to downtown, Old Town San Diego, and the coast. As the crow flies, we were only about 5 miles from the beach and the Pacific. Still, we weren’t quite satisfied with our circumstances and were thinking about a beach house with a view of the water. Since we had just renovated the condo and moved in, it wasn’t practical to just pack up and go somewhere else. After a lot of back and forth conversations, Pat suggested that a large picture or a mural might give us what we were looking for. We decided that a mural would be just the thing and the kitchen was the only place downstairs that would be suitable. The next consideration was that hiring an artist would cost us some big bucks. Pat suggested that we do the job ourselves. Neither of us had ever shown any artistic ability but what the heck…? A coat of paint would cover anything that was too ugly for humans to view.

We bought some paint and got started. Pat and I enjoyed working on it and Jeff got involved for a while. Terri stopped to see us one day and we convinced her to add a few strokes. When we got done it kind of looked as if you were stepping out the kitchen door onto a porch and then a sandy beach. Maybe you could call it “hokey” or even “tacky” but it was fun to do and we enjoyed it all the time we were there.

We only stayed in the condo for 2 years. Pat and I continued searching the Multiple Listings online for the Fort Worth, Texas area. We had some friends down there we had been talking to and ended up buying a new 4 bedroom, brick home in Keller. So much for downsizing but I guess we satisfied our itch for something different. 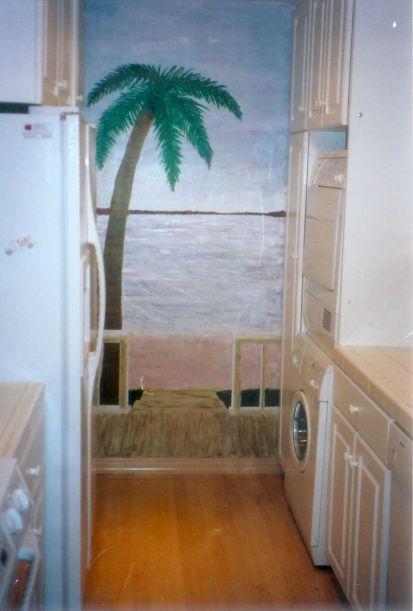 2 thoughts on “Our Beach House”