I had been to the U.S. Navy Recruit Training Center at Great Lakes, Illinois for boot camp and had then gone home to Kansas on a 30 day leave. Now, I was headed for Glenview Naval Air Station just north of Chicago where I would spend 5 or 6 months while waiting for orders to school. Coming into Chicago on the train was exciting for me. I had wanted to check out Chicago ever since reading Carl Sandburg’s poem, “Chicago”, in high school. I was already impressed as we rolled through the neighborhoods and saw what a large city it was. Then, as we went through the railroad switching yards and saw track after track I knew it was a big-time operation. No wonder Carl Sandburg called it a “Player with Railroads and the Nation’s Freight Handler”. My gosh, they’ve got more tracks than you can shake a stick at. This is going to be special.

I got checked in at Glenview and started using my spare evenings and weekends to see the city. I’d ride the commuter trains from Glenview into downtown Chicago and get off the “El” somewhere in the loop and just wander around. It didn’t matter where I was for I looked in every store window and went into every building that looked interesting. I checked out Marshall-Field, the giant department store, Navy Pier, Soldier Field, and the Museum of Science and Industry where they displayed U-505, the German submarine captured during WWII. A number of times, I went into the lobby of the Palmer House Hotel just to gaze at the beautiful woodwork and the rest of the décor. After a few visits the doorman recognized me and would nod when I showed up. I was really fascinated by the lift bridges along the river and was highly entertained when I got there at the right time to see the bridge open up and a ship go sailing across the street! I enjoyed a couple of night clubs on the main drag, Randolph Street I think it was, where in the evening you could stand out on the sidewalk and listen to Jack Teagarden and other well-known musicians. 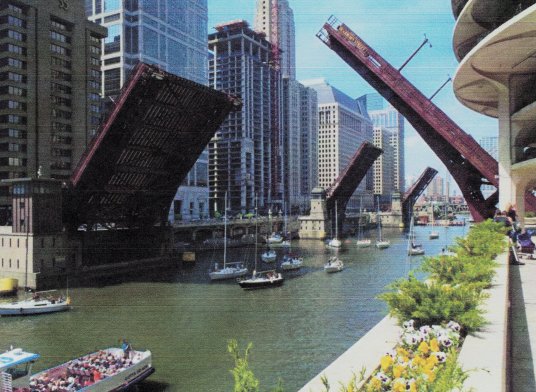 One of my favorite buildings was the John Hancock Building. At this time, 1957, I believe it was the tallest building in Chicago. It had an unbelievable view of the city and Lake Michigan from the top floor where there was a restaurant and bar. You could sit up there and enjoy all the sights. I celebrated my 21st birthday there and it was the day I quit drinking. My hair started turning gray at the temples when I was 17. This gave me access to beer joints, bars, and liquor stores long before I should have been admitted and I was never once challenged or carded.

My excursions in the city were always alone as I wasn’t the buddy-buddy type. On my 21st birthday I did my normal sight-seeing and then went over to the John Hancock. Up in the lounge, I ordered a 7 and 7, my favorite drink, and sat back to enjoy the view and think things over. I was thinking that for the first time, my drink was legal, but my next thought was that I was a pretty poor man if the ability to buy a drink was the highlight of my day. Right then I decided that drinking was a waste of time and money and certainly a waste of life. I’ve adhered to that belief ever since and haven’t ordered another mixed drink.

There were 4 or 5 tattoo parlors in the loop and I had been checking them pretty close. I’d always wanted a tattoo and had decided that this was the time and place to get it done. The tattoo parlors looked like you would expect on the outside. The windows were wildly painted and gave off a cheap, carnival feeling. I started going in and talking to the tattoo artists so I could make a decision on what guy I wanted to do the job for me. In the group, there was only one place that impressed me at all. It was very clean and orderly and the man inside was nicely dressed in slacks and a dress shirt with no tie. I introduced myself and told him I wanted to learn about tattoos prior to getting one. He told me his name was Phil Sparrow and that he was a retired professor from Loyola University. He said he enjoyed doing the tattoos and in his spare time between clients was writing a novel. He said he would be glad to show me how the art of tattooing was done. His warm and gracious manner made me feel comfortable and I decided right then that he was the guy to do the tattoo work for me.

That first day, Phil showed me the plastic templates he used first to trace the outline of the pattern. He used a marker to draw the lines on your skin. Next came the vibrating tool with a large needle installed that was dipped in the black ink from time to time and created the outline. Colors were filled in with a broader tool that actually looked like 5 or 6 needles welded together to form a wider tool. Phil said that as he worked his way across the design he would finish all the work with one color before starting the next. That pretty much took care of the basics for me.

I think it was on my second visit to the shop that Phil asked if I was interested in reading a couple of chapters of his novel. I immediately said yes and got started. I don’t remember the plot but do remember that I liked his style. He had an open and uncluttered way of telling a story. You were able to relax and enjoy it without getting all tangled up in it. I don’t know if he ever got the book published. I enjoyed just hanging out and reading. When Phil had a customer I would watch as he created the tattoo.

I had to pick a design and decide where I wanted the tattoo to be. The only tattoo I had ever seen up close was on the upper arm of my Grandpa, George Sicks. His was located on his upper arm, almost to the shoulder, and was of an old sailing ship under full sail. The thing was probably 1 ½” from end-to-end. I couldn’t imagine getting a tattoo if I was going to hide it. I decided that when I was dressed casually I would display it but if I was wearing my uniform or dress clothes I would keep it covered. I always thought it looked tacky to see a tattoo peeking out from a guy’s cuff or the neck of his shirt. Phil had several designs of eagles that I liked and I finally picked one of an eagle swooping down or landing with talons extended as if to catch his prey. The template fit on my forearm and looked like it was swooping down to grab the I.D. bracelet I wore. The bracelet was awarded to me at the graduation ceremony at the Naval Recruit Training Command when I was named as “Honor Man” of my company at boot camp. it.

After all the decisions were made, it just took Phil a few minutes to execute the tattoo. The base color was indigo and there were small red sections on the leading edges of the wings. The eagle also had a yellow beak and feet. The red and yellow have pretty much faded away after more than 57 years but I’m still happy with the outcome.

I’ve told stories to my wife and kids about Chicago and Phil Sparrow many times. Our daughter, Terri, was intrigued by the name “Phil Sparrow” and looked him up on the Internet. It turns out that Phil was everything he said he was…and more. Terri found articles on Phil and on the famous San Francisco tattoo artist and designer, Ed Hardy. Hardy considers Phil Sparrow to be his mentor and gives him credit for his inspiration and guidance and for being the man who pioneered the inclusion of Japanese design into western tattoo artistry. Hardy, himself, has branched out and designs jewelry and purses and other items. Our grand-daughter, Christie, is very familiar with his creations.