Gene Scholfield and his Dad had a feed and grain store on the west side of the 400 block of State Street. I believe they called it Scholfield Hatchery. I remember that in the spring they would have brooders on the floor in the front room where you could look in from the sidewalk and see the chicks. Of course, you could go inside the store and see them too.

A brooder is a heated cage where baby chicks are raised. It keeps them warm and safe and together.

As Easter drew near, colored chicks were added to the brooder and the chicks were so cute all the little kids wanted one. Like bunny rabbits they were a big part of Easter. So, after a lot of tears and begging a lot of kids took one of those cute chicks home. The excitement lasted for a few days and then the chicks were neglected and succumbed. It’s doubtful that many lived through the holiday season. 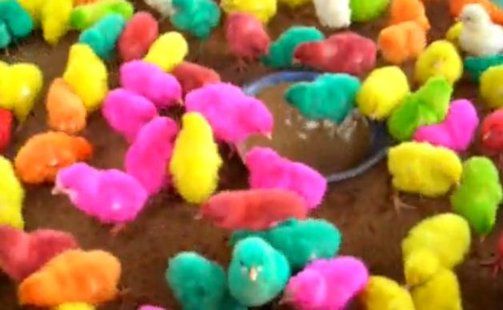 I was thinking about the colored chicks this morning and got to wondering how they dyed them. It seemed like the simplest way would be to just dunk the chick in a bowl of food coloring and then let it hop around until it dried off. I went to the Internet and discovered that coloring chicks is not at all what you would think. Some might even call it creepy!

You’ve got your eggs in an incubator, so on the 13th day you remove an egg. You hold it with the pointed end up. Wipe the tip with alcohol to sterilize it. You’ve already loaded a syringe with the proper amount of vegetable dye (3% or less concentration). Measure down about one inch from the tip of the egg and make a hole. Inject the vegetable dye, Seal the hole with a small bandage and return the egg to the incubator. Now it’s just a question of waiting the allotted time and you will have cute little colored chicks all over the place.