I grew up in Augusta, Kansas, a small town seventeen miles east of Wichita. Augusta served as a bedroom community for the larger city. Many of our friends and relatives worked in the aviation industry. During WWII, Beech, Cessna, and Boeing hired thousands of people and the city called itself “The Aviation Capital of the World.” There were many small manufacturers before the war and during the evolution of the industry they came and went due to money and growth problems or by being swallowed up by more aggressive entities. One of the success stories after the war was the development of the Lear Jet by Bill Lear and company. I’ve got a few little stories that are loosely connected to Wichita aviation that I’d like to share. I guess they are important only because I remember them. Hope you find them interesting.

During World War II, Pat’s mother, Melba Lee and her younger sister, Mable did their part by working as “Rosie the Riveter” at Beech Aircraft (later known as Beechcraft). They did well and Melba advanced to a Section Leader position. 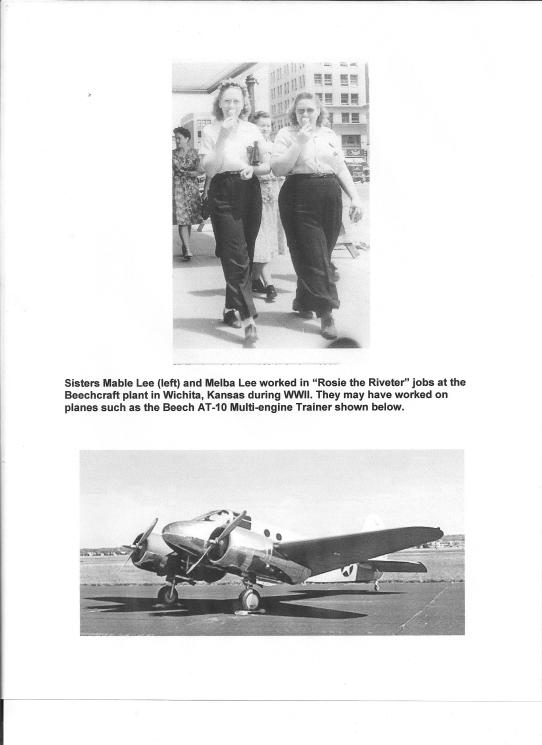 I’m not sure when, but it probably would have been 1945, our Mom was working at the local refinery, and our great-aunt Rachel Peebler was taking care of my sister and I. One summer day, she loaded us up in her green Packard and took us to Wichita to buy some school clothes. We went to Buck’s Department Store on the northeast corner of Broadway and Douglas. We got our shopping done and Aunt Rachel said she was taking us to lunch. Diagonally across the intersection, on the southwest corner, was a big, brown, brick building that I think was a bank. We entered the building, went to the elevator, and rode up to the second or third floor. We stepped out of the elevator into a pleasant-feeling and busy restaurant. Aunt Rachel led us through the tables until she came to the table of a well-dressed older man who rose as she approached and shook her hand. She introduced the man as Mr. Brown and said she had known him for some time. In later years, I figured that he most likely was the man that owned Brown’s Bank in Augusta.

We left Mr. Brown and continued to another table where two ladies were seated. Aunt Rachel introduced us to Olive Ann Beech. We kids knew who she was. She and her husband, Walter Beech, owned Beech Aircraft and were prominent in the business and social life of the city. Their names were in the papers or on the radio every day. Aunt Rachel visited with Mrs. Beech and the other lady for a few minutes and then we had lunch and went home.

The first jet airplane I ever saw was heading for the air base in Wichita. I don’t know the exact year but can establish some brackets on the time. We were at Augusta Junior High School. The school served grades 6,7, and 8. That means I was probably 11, 12, or 13(1947-1949). It was during the afternoon recess when we spotted the plane heading west toward Wichita. The development of jet fighter planes had been in the news quite often. I can’t remember what model it was but the next day the papers carried the story about the plane and its arrival at the base in Wichita.

When I enlisted in the Navy in 1957, I sold my car, a baby-blue 1953 Ford convertible. The morning I was to leave, Johnny Luding drove me to Wichita and dropped me off at the Navy Recruiting Office. After I got out of boot camp in June, I came home on a 30-day leave. Jack Watson was working in the Auditing Department at Sears Roebuck in Wichita. He said there was a cute girl working there and worked it out to introduce me to Pat. We started going out but I was hampered by my lack of transportation. Johnny was working second shift at Boeing and said I could use his car. So, I would drop Johnny off at Boeing and then go spend the evening with Pat. At the proper time, at the end of the evening, I would be back at the Boeing gate waiting for John. Pat and I got acquainted and made up our minds about each other and got married that November on a 3 day Veterans Day weekend. Since we just celebrated our 59th wedding anniversary, I want to say “Thanks again” to Jack and Johnny.

After my 30-day leave, and courting Pat, I checked into Glenview Naval Air Station. It was located just outside of Chicago. Naval Reserve Squadrons “Weekend Warriors” trained there so there was a lot of flying done on the weekends. The pilots had to get in some “stick time” to maintain their proficiency and would fly short hops locally or to nearby cities. They usually tried to get in 4 hours at a time. When I wasn’t working, I would hang out at the Operations Building and catch a ride. For multi-engine aircraft, the base had R4D’s (same as U.S. Air Force C-47) and SNB’s. I only took one hop in an R4D and was bored out of my mind as there was nothing to do but look out the window. The Navy SNB was a variant of the Beech Model 18 or “Twin Beech” as it was known. It was a smaller twin engine aircraft, made for small airfields and was a very reliable aircraft. I forget how many seats it had but you could sit up close to the pilots and watch what they were doing. I probably took half a dozen hops in the SNB’s for a total of 25 or 30 hours. Fun stuff.

I don’t know all the details but sometime during the early 1960’s, my friend, neighbor, and classmate, Glenn Douthitt, was working at Boeing, in Wichita, as a draftsman. Bill Lear moved Lear Jet to Wichita in 1962 and began work on Lear Jet #1. Glenn went to work for Lear and played a big part in the design and layout of the innovative new instrument panel. Glenn went on to become the Chief Contracts Negotiator for the Avionics branch of Lear, located in Grand Rapids, Michigan.

Now, you’ve read a bunch of little stories that are connected in some way to Wichita and its aviation history. I think it is interesting to see how memories can be attached to a common thread. If any of this aviation talk has piqued your interest, one story you might enjoy pursuing is the history of Bill Lear and Lear Jet.