ack in the mid-1960’s I had a man named John Grant working for me as an Assistant Foreman. One Monday morning John came in and handed me his letter of resignation and said he was moving to Colorado to work for his father-in-law. We talked about it for a few minutes and I wished him well. Then, he told me that one problem he hadn’t resolved yet was what to do with the desert tortoise named Sam that he had kept as a pet for several years. John was afraid that the extremely cold winters of Colorado might be too much for Sam. He suggested that I might like to adopt Sam and care for him. It sounded good to me so a few evenings later John brought him over to the house.

The desert tortoise inhabits the southwestern United States and northern Mexico. There are two species, one living east of the Colorado River in Arizona and Mexico and the other living west of the Colorado, basically in the Mojave Desert. They are considered to be endangered and if you run across one in the wild, it’s against the law to touch, bother, or harm them. There is a means for adopting those who have been rescued from unsafe conditions.

The desert tortoises live from 60 to 80 years. Mature male tortoises can be from 12 to 18 inches in length with females being somewhat smaller.

In these little stories I’ve been trying to shed some light on the thought processes of animals but in Sam’s case I’ve got to ‘fess up and tell you that I’m up against the wall. He ate, slept, pooped, and hibernated, and I can’t make any funny stories out of that. We turned him loose in the back yard where like a cow, he grazed and slept. We fed him lettuce every day and he really enjoyed that. For goodies or snacks, he seemed to enjoy things that were red. For instance, in our back yard we had 3 hibiscus bushes that were about 8 feet tall and were always full of blossoms. Two of the bushes were red and the other was white. If you picked a bunch of blossoms and put them in front of him, Sam would eat them all but he ate the red ones first.

Sam’s favorite snack was watermelon. He would eat every bit you gave him and when he was done, he would have red juice all over his jaw and face and he would sit there blinking his eyes with a satisfied look on his face. What a feast!

A desert tortoise hibernates through the winter. As the fall season moves in, temperatures drop and the days become shorter. This tells the desert tortoise it’s time to start looking for a place to hole up for the winter. They get sluggish and don’t move around as much though they may start crawling under things or digging holes. Taking John Grant’s advice, at this time we would pick Sam up and carry him into the house and put him in a dresser drawer. He would sleep there until spring when the days got warmer and longer. Then, we would either arbitrarily take him to the back yard to wake up or wait until we heard him moving around before taking him out. As I recall, Sam spent a couple of years in dresser drawers and a couple of years in a closet.

One day, Sam wasn’t in the yard. I checked every square inch and there were no burrows or holes that would have allowed him to escape. Sam had been turtle-napped! It was a shame. We had all enjoyed seeing him out there in the yard. He was docile and seemed to be content with life as he grazed his way through each day. 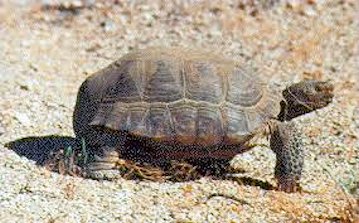