We live about 1 1/2 to 2 miles west of Miramar Marine Corps Air Facility (MCAF). Miramar puts on an air show in October of each year and it’s now billed as the top air show in the country with this year’s attendance forecasted to be 700,000. The stars of the big show are the Blue Angels and their performances are amazing. We are lucky in that when they make a low pass at the Miramar runway it brings them straight down our main thoroughfare and we can see them from the front of the house or the patio

This year’s air show was to be held last weekend, October 3rd, 4th, and 5th. Last Tuesday, about 8:30 in the morning, the house starts shaking, the windows rattle, and the roaring noise is so loud you can’t hear the TV and Good Morning America! The Blue Angels are back in town and this time they are coming with seven FA-18’s and a giant C-130. The noise was deafening. Isabella, the cat, was going crazy as she rushed from one hiding place to the next trying to get away. As the planes made their low pass to say “hello” it was a reminder that Miramar was the home of the original Top Gun school and the place where the movie was made.

I really enjoy the Blue Angels but was concerned about Izzie, the cat. Wednesday and Thursday, as the Blue Angels practiced for their performance, she was running from one hiding place to the next and was totally freaked out. I tried to catch her and comfort her but wasn’t fast enough. Friday was the first day of the air show and the Blue Angels lifted off about 2:30 for their performance. When I heard the roar of their first pass coming at us, I jumped up and started calling Izzie. Apparently, she had put up with all she could stand. When I got to the bedroom, she dashed out from under the bed and ran to my feet and assumed the stance she takes when wanting to be picked up. I sat down on the bed and held her in my lap facing me. She sat with her front legs stiff as poles and stared me right in the eye. I started stroking her back and telling her over and over that it was going to be okay. To be “okay”, was a concept she had learned when we were dealing with the trash trucks. She had been going nuts when dealing with them and I told her over and over that she would be okay and finally she accepted the fact that the noise of the trucks wouldn’t hurt her and now she could care less.

We sat there as the Blue Angels went through their routine with me stroking Izzie’s back and telling her it was okay while she sat there all stiff-legged and stared at me and was ready to cut and run the second I flinched and acknowledged trouble. All of a sudden, the stiffness went out of her body and she seemed to relax as the Blue Angels finished their performance.

The next day, Saturday, at 2:30, here we go again. When I heard the roar coming, I jumped to my feet and went to find Izzie. She was in the bedroom again but this time she was stretched out full length and was sound asleep! I was amazed! I watched her as the planes made a couple more passes and the house shook and the windows rattled but she never moved a muscle. I know she was awake but she had conquered her fear. Sunday, the final day of the air show was good, too. Izzie went about her business without a second thought to the noise.

One of the best things about the Miramar Air Show has been the ability to get good pictures of the Blue Angels. On most of their runs they come in from the west so we can stand out on our patio and catch them coming in and snap pictures as they are coming right up the gut. We can also go out in our front yard and shoot them going away as they break into their fantastic routines like the star-burst pattern. Its fun either way but I prefer to catch them from the patio as they are coming “head on”.

I’ve gotten some good pictures in the past but this year things were different. I had a great camera but Kodak no longer supported the software and it didn’t work with Windows 7. I sold the camera on eBay and bought a lesser camera that I can carry in my shirt pocket.

The trees in our neighborhood have grown. Now, you can hear the Blue Angels coming but they crest the trees and you only have about 2 seconds to find them in the view finder and snap the shutter before they are gone. My eyesight has gotten worse and my reflexes are slower so I’m practically worthless. After 2 days of practice and 3 days of the air show, I didn’t have one decent picture. I gave up and went back to taking pictures of the humming birds as they came to visit our feeder. They are tiny little creatures and fast but they will hover and stay in one place long enough to get their picture.

Fortunately, Pat realized that I was failing in my assignment as an action photographer and she grabbed her i-phone and ran out into the front yard and got some Blue Angel pictures that she forwarded to my computer. Thanks to her, I’ve got a couple of pictures of the planes to go along with my humming birds. 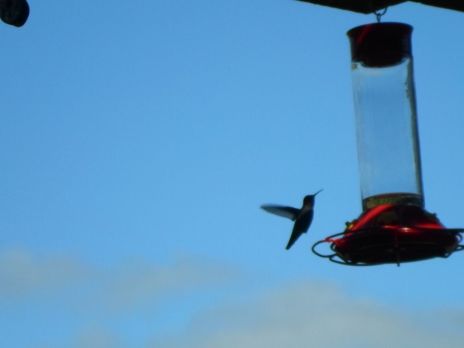 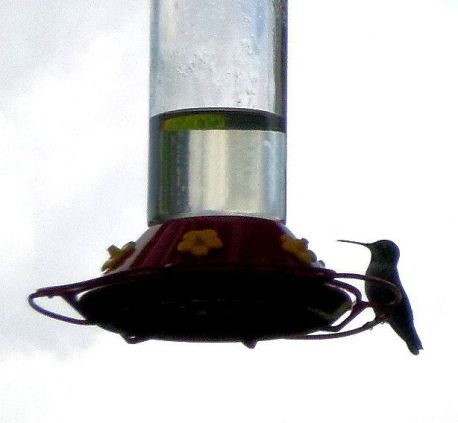