I have always liked old barns. When you see them quietly standing there now, they may not look as good or as strong as they once did but they have a resolute and stately quality about them. Their job is done but if needed, they would gladly step up to the mark. This story about the old barn is the only work of fiction I have attempted. I hope you see the barn as a giver and a worthy member of the community. 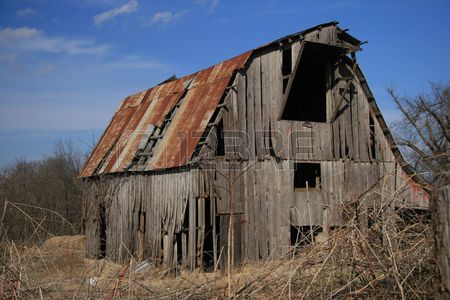 Hello! I seldom get visits from pretty young ladies like you. I’ll bet you are a city girl and have never met or talked to an old barn like me. What…you say you would like to take my picture? That’s an unusual request as I certainly don’t look my best now. I’m nearly one hundred years old and am missing some of my shingles and boards and have begun to lean a bit. No, I’ve never had a coat of paint. I hear that in some parts of the country they paint their barns but around here they just let us weather.

How was my early life? Oh, it was wonderful! Barns were a big part of life on the farm. In the early days if someone needed a barn, neighbors came from miles around to take part in a “barn raising”. Generally, the men built the barn, the women cooked a wonderful meal, and the kids got acquainted and played together. The community developed camaraderie and the barn was pretty much built in a day.

The hay mow or loft, which was the upper floor, was large enough to store several tons of hay for the winter. The hay of course fed the cattle and horses but it also insulated the barn and helped me provide shelter for the animals and for my people when they needed it.

They brought the milk cow in twice a day and milked her and when she had a calf, the birthing took place in one of my stalls where they knew both of them would be safe. The farmer had a beautiful team of draft horse that lived here also. They did all the heavy work here on the farm. It was my pleasure to give them a warm, dry home where they could rest and eat and get ready for the next day.

I also enjoyed the hens. There were a couple of them that just wouldn’t stay in the chicken coop. They’d come in here and lay their eggs in the mangers and even up in the hay mow sometimes. The farmer’s wife finally gave up on keeping those hens contained and made a regular trip out here every day to gather their eggs.

Sometimes the boys and girls got caught necking out here in the loft. The farmer would dress them down but he and his wife always chuckled about it later.

I also provided storage for the harnesses and for corn and grain and the many tools it takes to keep a farm going. There are many facets to farming and we tried to be prepared for them all.

Life was good and my people were happy. They didn’t have a lot of money but they always worked hard and as a result had plenty to eat and always had the things they needed.

What happened to me? Well, I don’t have anyone to care for me anymore. The kids all grew up and decided to get jobs in the city where they could get a steady paycheck and not have to work from dawn until dark. The farmer and his wife hung on because this was the life they loved but eventually they became old and feeble and died.

What was that? Oh, you snapped my picture. Well, when you look at it later remember that in spite of what you see, it’s been a good life for me.

What does the future hold? Well, I’ll keep standing here as long as I can. I miss my people and the laughter and the animals. I took good care of them all. It’s been wonderful and I’ll keep looking forward to the next sunrise until there are no more.

2 thoughts on “The Old Barn”