The Seaplane Tender that operated in our part of the world was the U.S.S. Pine Island (AV 12). The tenders were designed to be floating maintenance shops that could operate on any ocean and support seaplane squadrons and keep them flying. They carried a full supply of parts including new engines. They were identified by their large afterdeck and two giant cranes, one at the stern and the other amidships. They could pick up a P5M with an empty weight of 50,000 lbs. and place it on the afterdeck for engine swaps or other repairs.

In 1959, a typhoon was headed for Japan and our squadron was ordered to get airborne and head for Sangley Point, the Philippines. We took off and were only about an hour out of Iwakuni when we lost an engine. Sangley Point was a seaplane base but was too far away. We were informed that the Seaplane Tender, U.S.S. Pine Island (AV 12), was operating out of Buckner Bay in Okinawa and they would support us if we diverted to there. We got there ok and landed during a squall. The winds weren’t bad and a single-engine landing was no big deal. We’d been told on the way down that the Pine Island was out to sea for gunnery practice and wouldn’t be back for a couple of days. We had a pleasant vacation while we waited. The base assigned a boat and driver to take us ashore for meals and to sleep at night. I slept on the base one night and slept aboard the plane the second. For 2 days we dived off the wings and did a lot of swimming. On top of a wing was a good place to lie around and get a sun tan too. The Pine Island finally showed up. We were getting up-tight about not having our mail or being able to make an international phone call to our wives. The only way a sailor could make an overseas phone call was with the help of Ham Radio Operators. They would pick up your call and patch it through to the person you were calling. Sometimes it took a couple of hours before a connection could be made.

In one of the next stories I will talk about picking up a seaplane and putting it on the deck of the Seaplane Tender. 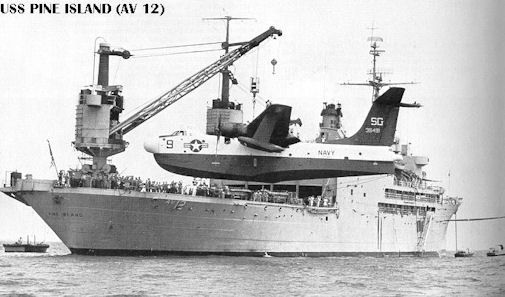 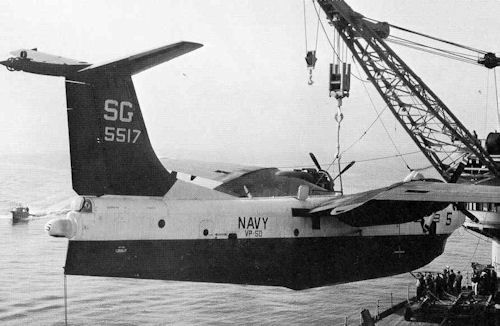