Thinking about it, our family has a lot of stories that involve birds and animals. Well, here’s another one.

One of the most interesting and enjoyable experiences I have ever had is the ride on the Palm Springs Tramway from the desert floor and up toward the peak of Mt. San Jacinto (haw-sin-toe). The peak, itself is at 10,834 feet. The tramway starts at Valley Station at an elevation of 2,643 ft. and rises to the Mountain Station at 8,516 ft. That’s an increase of 6,000 feet, over a mile, and the ride is actually longer than that because you are riding the hypotenuse of the triangle. 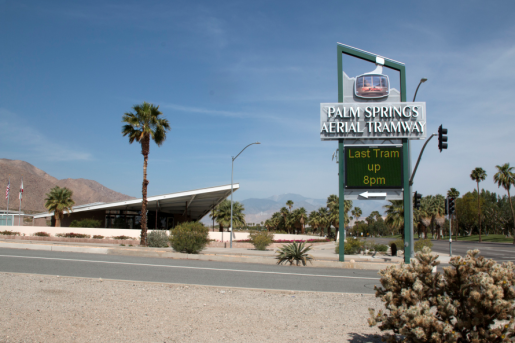 The city of Palm Springs is in the desert and the temperature can easily be 115 degrees in summer. Imagine how good it feels to ride to Mountain Station where you may need a jacket. The temperature difference is usually about 40 degrees.

The tramcars have windows all the way around for maximum viewing. Pat has ridden the tram 3 times and I have ridden it twice. At the time of our rides, the cars didn’t rotate so we had to move from one side of the car to the other to get a good look at both sides of the canyon. In the year 2000, the new tramcars were installed that slowly rotate 360 degrees and make 2 complete revolutions as you go from the Valley Station to Mountain Station. 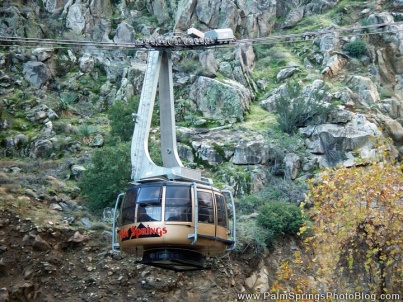 In 1967, the first episode of the TV detective show, “Mannix” was shot on the tram and featured some wild scenes on top of the tramcars. (The star of the show, Mike Connors, is a distant relative of our son-in-law, Steve.) Pat and I enjoyed this show and also saw an episode of the TV show, “I Spy” that was shot on the tram. The stuntmen on both shows performed some harrowing stunts.

At Mountain Station there us a large lodge with a restaurant, gift shop, and viewing decks. There is a good selection of souvenirs and post cards in the gift shop in case your own pictures didn’t turn out well. Of course, the brisk mountain air will make you hungry and you’ll need to visit the restaurant for a meal or at least, a hot cup of coffee. The observation deck has telescopes mounted in a number of places and as you look around at this wild, mountain country you will further appreciate the amazing amount of planning and work that went into the building of the tramway.

The first tower was the only one that could be reached by a road. The materials and workmen to build the rest of the towers were brought in by helicopter. All together, helicopters made 23,000 trips before the tram was completed.

Our daughter, Terri, and her husband, Steve, were taking the kids to Palm Springs for the weekend and invited Pat and I to go along. It sounded like fun to us. Grand-daughter, Christie, was nearly four and grandson, David, was a cute little infant. We enjoyed the ride over as Palm Springs is less than two hours from San Diego and we were looking forward to riding the Palm Springs Tramway.

We got to the Valley Station and Terri decided that she and David would stay at the bottom while the rest of us took the trip. We were mainly interested in the spectacular ride and didn’t plan to be gone long. 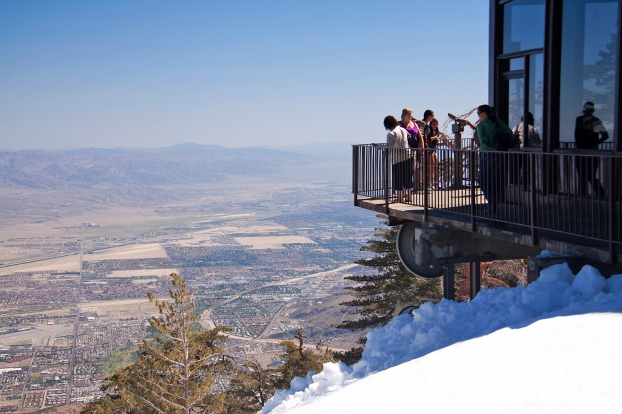 The ride to the top was just as extraordinary as it was touted to be. The height, the rugged cliffs, the changing micro-climate zones, the amazing construction of the thing, and the views, added up to an incomparable 10 or 12 minutes. We looked around Mountain Station to see what it was like. Steve read some signs about a hiking trail that went on up the mountain. Farther up, there were even camp sites where you could spend the night. Steve said he wanted to take a look at the hiking trail, thinking that he and Terri might want to return sometime for a hike. We all headed outside to enjoy the amazing view. We found the trail head and probably walked half a city block. The area was populated with pine trees, bushes, boulders, and big flat rocks. Steve found some signs telling about hiking trails and camp sites and was intent on reading them. Christie asked her Dad if she could climb on the big rocks next to the trail and he told her to go ahead but to be careful. She crawled up on one of the big flat rocks that was part of a pile and sat down. I got involved with the view and was busy taking it all in when I heard Pat saying Steve’s name. Steve and I turned toward her about the same time and she immediately pointed toward Christie. We looked and saw Christie sitting on her rock and just behind her was a big bobcat! Steve stayed cool and climbed part way to Christie and told her that there were some neat little animals near the base of the rock and she should slowly and quietly come to him so he could lift her off the rock so she could see them. Christie did as she was told and when she got close enough, Steve grabbed her. The bobcat faded back into the brush and a Dad and two grandparents breathed a sigh of relief. That being enough excitement for one day, we headed back to the tram so we could go down and join up with Terri and David. It was a memorable excursion from start to finish.