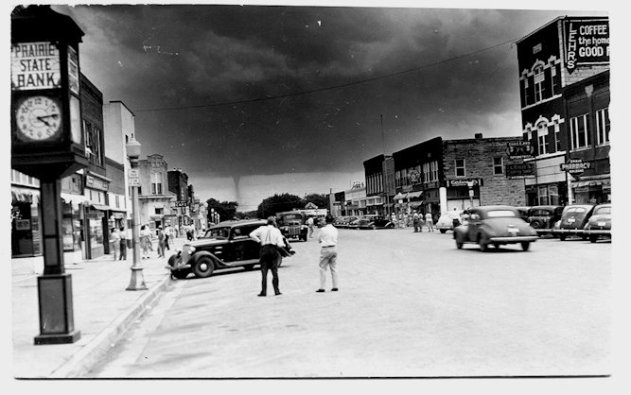 I like this picture because of the drama it displays. The big, black funnel looks like it is coming right up the main drag. The two men in the street seem transfixed and don’t know if they should stay and watch or run for cover.

Since posting this picture, I’ve received information that makes it even more compelling. I have received e-mails from Keith Scholfield and Jack Parker telling me of their connection to the event.

First, let me give you some background. Keith’s Dad, Gene Scholfield, owned Scholfield Hatchery and dealt in feed and grain and chicks. The store, easily identified by its white front, was located on the west side of the 400 block of State Street. Naturally, Keith spent a lot of time there. The first store north of the Hatchery was Bartholomew Furniture, owned by Jack Parker’s Grand-dad, Charles Bartholomew. Jack lived in the neighborhood and spent quite a bit of time at the family store. This information helps explain why the two boys were in the right place at the right time to witness the tornado that was heading for town.

If you look down toward the center of the picture, on the west side of the street, you can see the white storefront of Scholfield’s Hatchery. Keith has seen the picture a number of times over the years. It’s kind of fuzzy because it has been copied so many times, but as Keith points out, if you look closely you will see people standing on the roof of the building. Those are Gene Scholfield’s  employees along with Gene and Keith and Jack Parker. Jack first saw the picture a year or so ago on the museum’s web site and it triggered some fuzzy recollections in his memory of standing on a rooftop and watching an approaching storm. Jack and Keith have conferred about the picture and, though the memories are quite distant, agree that they were on the roof as the tornado was heading for town that day.

Keith says that the day after the tornado was sighted, his Dad took him for a drive southeast of town. They found the track of the tornado crossing Haverhill Road in a spot just north of Smileyberg.

Now, we’ve got a great picture and some people that we know who were associated with it. I think it’s remarkable that 3 old boys like us are communicating through the magic of the Internet about an incident that took place 71 years ago. Keith and I are 80 years old now and Jack is 81 and we have resurrected this story so it can be shared.